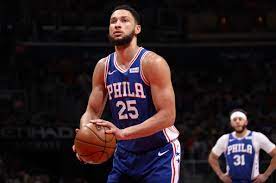 One of these days, Ben Simmons will be traded. As the rumors swirl. As tolerance wears thin. It’ll happen.

Daryl Morey isn’t trading Simmons for nothing. He’ll be patient. With free agency beginning this week, the opportunity will come. You hope, with Russell Westbrook on the Los Angeles Lakers, that Bradley Beal will be available. It’s Beal, or Damian Lillard. At least that’s what fans have convinced themselves would happen.

These outrageous offers that have leaked to reporters—between the Spurs, Cavaliers and Raptors—have been criticized by the general NBA public. It’s been funny to see the reaction. Of course, Morey should want a lot for Simmons. He’s a 25-year-old, multi-time All Star under contract for four more years. Philadelphia was the top seed in the East for a reason. Obviously, he doesn’t have as much trade value after this past postseason’s debacle, but he’s still a wonderful player, who will help any team in the regular season regardless of if his confidence to shoot free throws improves.

Last week’s draft was seen as the first real opportunity for Simmons to be dealt, but it would have been to a lottery team. Getting draft picks only helps the 76ers in their pursuit of a second star. It would be easier if Portland and/or Washington were forced to trade their high-scoring guards. Since the chatter has been moot, this has become a true waiting game. Will Morey blink first? A report has surfaced that Rich Paul and Ben Simmons are in “step” with the 76ers. They know a deal needs to be made, but how long can Philadelphia afford to wait?

It’s not like Simmons can make a real stink about it. Unless this situation seeps into training camp and the preseason. But I’m sure Morey has an offer in mind that he’d willingly approve for his one-time All NBA player. It’s a delicate balance, though. Because at some point a disgruntled star will want out. It just might not be until next season’s deadline. Will Ben Simmons have had already been traded when one does?

As somebody who watches very little college basketball, and on top of that figured the 76ers would trade their first-round pick to add veteran help, (that obviously could still be the case, but for now let’s pretend that cannot happen) I’m blindly all in for Jaden Springer. You can’t have too many halfcourt creators. It’s hurt the 76ers time and time again. Springer projects as a solid enough passer. He’s unafraid to attack the basket, too. His on-ball defense, clearly his calling card, makes you envision these crazy scenarios of what it could be for opponents.

I know Joel Embiid is well in his prime. He cannot wait for Springer to develop. A late first-round pick who will be 19 when the season begins won’t be any kind of difference maker this season, but the goal is to build the optimal team for when the time is right. Odds are Philadelphia won’t win next year’s championship, but, assuming Embiid signs an extension as free agency opens, the window will be open. You can see Springer being that type of difference maker as he reaches his 20s.

With news that Kyle Lowry will be headed to Miami, there aren’t many big names available for the 76ers. Lowry was always a pipe dream, partly because of the big unknown that is Simmons, but mainly because of the cap situation. With that, Morey can focus his attention elsewhere. You expect Danny Green to return. Furkan Korkmaz is iffy. Dwight Howard is as good as gone. Attention shifts to Washington. If the Wizards are able get Spencer Dinwiddie, it might make Beal happy enough to stay through the year.

Simmons will be traded, eventually. At least I hope this doesn’t get as annoying as the Carson Wentz nonsense.