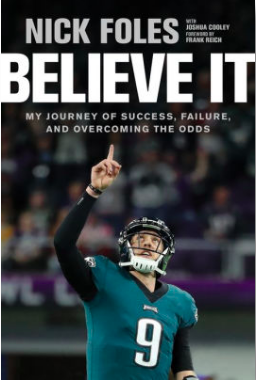 After the Eagles beat Minnesota in January, Nick Foles spoke about his failures in the final two weeks of the regular season. People knew Foles could play football effectively at the highest level, but after the performance against Oakland on Christmas night followed by a dud of a first quarter in Week 17 against the Cowboys, doubt crept into everybody separate from the Eagles.

It was the easy thing to do, because he looked terrible. Something happened during the bye week before the divisional playoff game against the Falcons, which led to Foles looking like himself. And then Minnesota happened. Foles couldn’t have played better, throwing long touchdown passes to Alshon Jeffery and Torrey Smith. His best pass of the night was a dart to Nelson Agholor for a long gain on the move. The Vikings had a historically excellent third-down defense, but Philadelphia went 10-14 during the game. It seemingly came out of nowhere. But Foles told the pool of reporters following the game that the team never questioned whether it could happen.

“We kept working and we kept getting more reps in practice. It’s just a rhythm thing. You just have to keep working. You’re not always going to have a great day. I’m sure down the road I’m going to play a bad game again. That’s the game of football. You’re going out there and competing at a high level, so you should never get down. You should always learn from those experiences and look forward to working through them. That’s the beautiful thing when you look back at the journey and you realize that it wasn’t always great. There were bumps in the road but you were able to overcome them with the people around you who believe in you and love you.” (Bo Wulf of The Athletic transcribed the quote. If you like sports, you must subscribe to The Athletic, seriously.)

Foles wrote a book about his journey from growing up in Texas to winning Super Bowl MVP.  It’s a refreshing, easy read that reveals some pretty cool details about Foles nearly retiring, insight to play calls like the third down completion to Agholor in the fourth quarter against the Rams that clinched the NFC East and Nick’s first tenure with the Eagles. Meant to inspire, Believe It accomplishes that. There’s a heavy influence in Nick’s relationship with God throughout as Nick detailed bible verses, relationships with team chaplains and his wife, Tori. It’s easy to forget how Foles first stint in Philadelphia ended. The Eagles actually were playing some solid football as he broke his collarbone, but Foles wasn’t playing as well as he during his 27-touchdown, two-interception 2013 season. Still, as he prepared for the off-season fully healthy, Chip Kelly gave him the call about the trade to St. Louis, which caught him off-guard.

Foles admits he should have spoken up as a Ram. He knew what situation made him most comfortable, but he failed to inform the Rams how he’d perform better. The fact was that St. Louis, led by Jeff Fisher, didn’t run the right offense for Foles to have any success. He basically retired at the end of the season, even though Andy Reid and other head coaches reached out to his agent about signing a contract. Foles didn’t want any part of it. He ended up going fly fishing with his brother-in-law and his brother-in-laws family, even texting Reid thanks but no thanks before embarking on the trip without cell phone service. This was in August as training camp began.

His wife and his family, however, pressed the issue, hoping he’d reconsider to play at least one more season in a new environment with the coach that drafted him. It’s pretty telling the importance of the year in Kansas City, despite the lack of playing time, was for Foles and his love for football. The book detailed his friendship with Alex Smith, which helped Foles establish traits to become a good back-up quarterback. The quarterback room in Kansas City would play an equivalent of H-O-R-S-E, but they called it C-H-I-E-F-S and only trick shots were allowed. As the Foles were expected to have a baby, and free agency beginning that following season, it made sense for Foles to return to Philadelphia, because he believed that sense of familiarity would be good for a newborn. Tori and Nick had their daughter, Lily James (not named after the British actress) on June 16, 2017. That’s a pretty good date to have baby, but I’m a bit biased.

As training camp begins, it’s surreal to think of what Foles accomplished last year. There’s a cool story Foles tells in the biography before he leaves for the Super Bowl. His family ate at this nice restaurant in the city, but nobody bothered him during the meal. Before he left, though, the entire place gave him a standing ovation, a send-off before his flight to Minnesota for the Super Bowl. Foles told his wife in the moment, our lives are changed forever. What Foles did to the city of Philadelphia can’t ever be taken away. It’ll try to be duplicated, but there’s something about the first Super Bowl after 51 unsuccessful tries. There’s something truly magical about the dynamics of that Eagles team, and Foles exemplified it.

One thought on “Believe It: Nick Foles details his journey to Super Bowl MVP”