The Beautiful Thing About Never Giving Up

It’s easy to cheer for certain guys. Guys like Chris Long, who donated every regular season game check. Guys like Alshon Jeffery, who, despite not having the best year of his career, only cared about winning rather than his numbers. Guys like Carson Wentz, who doesn’t just talk the talk but backs up his faith with meaningful contributions to those who need it most. The Eagles have several players who use their platform to amaze people more off the field than on it. Everybody also loves to cheer for players who have overcome something. Everybody faces adversity, of course, but some players, especially football ones, only have so many opportunities to make a difference; to prove they belong. Days after a Super Bowl win, I can’t help but think about two players. Two players who could have given up. But they stuck with it. They believed in themselves. Even when nobody else did.

In a high-scoring game decided by a touchdown, dozens of plays stood out. One, in particular, stuck out more than the others. New England had just scored with ease, using Rob Gronkowski to deplete the Eagles secondary to begin the second half. Here come the Patriots. 75 yards barely breaking a sweat. Sure, the Eagles scored 22 first half points, but New England would make the necessary defensive adjustments. Philly, clinging to a three-point lead, received the ball just at the end zone. Kenjon Barner returned it 25 yards but as soon as New England tackled him Kamu Grugier-Hill lifted his hands up in disgust. 10-yard penalty. The Eagles began the drive from the 15-yard line.

The nerves settled in. The Patriots already cut into a 10-point lead. Tom Brady looked in control. The Eagles couldn’t afford to go three and out. First down resulted in a four-yard run. Second down Nick Foles threw the ball to Nelson Agholor along the sideline well past the first down line, but it slipped through Agholor’s hands. Mistakes happen. Last year, Agholor lets the drop impact the rest of his game. I don’t know what went through Agholor’s head immediately after the drop. Last year, the former first round pick was in a dark place. He didn’t produce a lick. He made mental error after mental error. Doug Pederson gave him an important Monday Night Football game against the Packers off in order for him to clear his mind.

Agholor turned off his comments on his Instagram at some point during last off-season. He’d post things about working hard, becoming better, trusting himself. But the backlash from fans or naysayers were probably too disheartening and discouraging for him to read through. Players said it was Agholor, along with Wentz, who showed up earliest to the facility each day. Agholor has a tweet pinned on his profile. It’s a quote from Denzel Washington that reads: “Without commitment, you’ll never start, but more importantly, without consistency, you’ll never finish.” It didn’t surprise me the very next play went to Agholor. And it didn’t surprise me that the player who has overcome so much adversity delivered, spinning away from a tackler en route to a 17-yard gain. It wasn’t the last time Agholor made a play as Foles continued to feed him the ball, especially in the game-winning drive the following quarter.

It’s been over a week since Foles completed an unthinkable postseason stretch. He did his part against Atlanta, showcasing his accuracy on third down in the second half of the narrow win. He had his best game of his career against Minnesota a week later. Foles, after the win against the Vikings, delivered a message about how special the team was, partly because they never gave up on him. Even when he struggled against the Raiders Christmas night. Even when he looked like a rookie against the Cowboys in Week 17. Here comes Foles. Doing whatever he wanted against a Bill Belichick-inspired defense. Foles dropped dimes to Corey Clement and Alshon Jeffery and Zach Ertz. It was Foles who called for The Philly Special. Just like Foles did after the NFC Championship win, a powerful message was delivered shortly after the Eagles won their first ever Super Bowl: 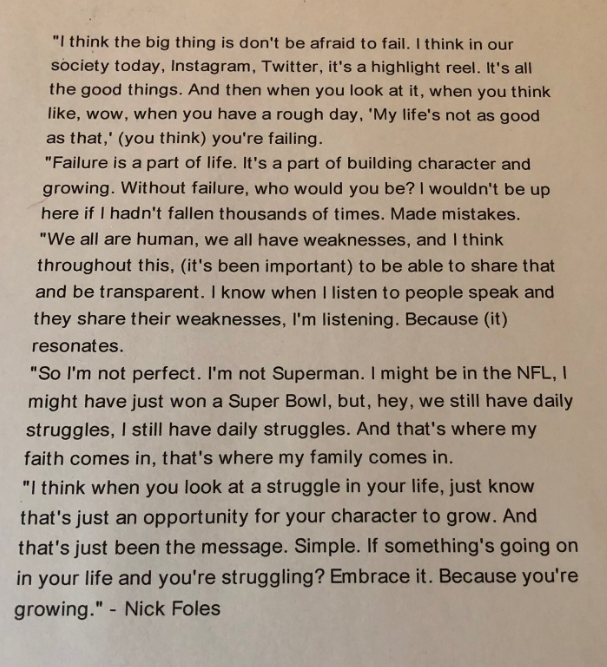 *Credit to Sam Farmer of LA Times for transcribing the quote*

The entire discourse is inspiring. It’s moving to hear Foles, a player who nearly quit football altogether, speak so freely about failure. Foles hits it right on the head. He’s speaking the truth about how essential it is to feel failure, to embrace the struggle, because what happens when the struggle’s complete is real growth.

Philadelphia won its first Super Bowl. The Eagles out-executed the Patriots all game long. Foles made some incredible passes. Brandon Graham forced a timely fumble. Jake Elliott kicked some clutch kicks. The season was special from the beginning. All year long, Philadelphia prevailed. This Eagles team taught many lessons applicable to daily life. The importance of persistence. The importance of failure. And the ever importance of never giving up.