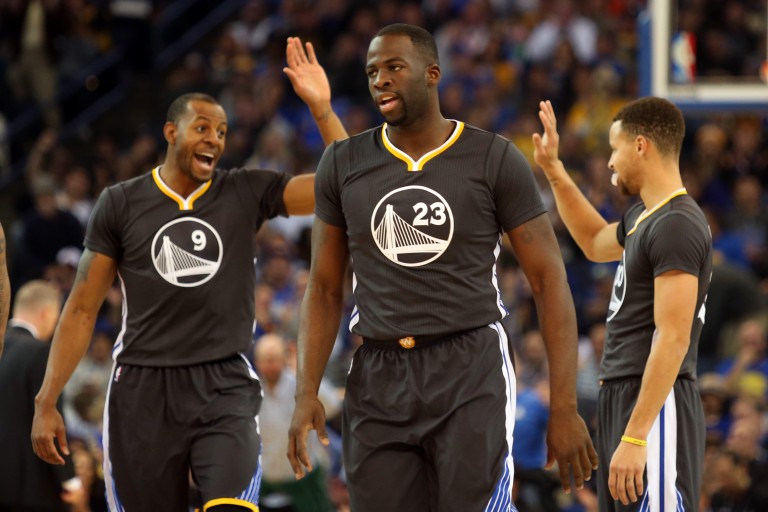 Last night’s Thunder-Warriors game had a bit of everything. The Warriors scored 73 first half points. Oklahoma City wanted to guard the 3-point line, which they did, but unfortunately the Thunder didn’t do a good job at individual or team defense in the first 24 minutes. Stephen Curry used a couple picks to find a wide-open Marreese Speights for mid-range jumpers. Harrison Barnes did whatever he wanted in the first half, scoring 16 points. Speights was actually the X-Factor last night. Usually Speights is the third big man for the Warriors, but without Festus Ezeli Golden State used Speights early and often. Curry might’ve missed some threes he usually makes, but regardless the Thunder did a solid job defending him. Curry was 1-9 from three, and even though he 16 of 26 attempts he made some big plays down the stretch that ultimately gave the Warriors their 41st straight home win.

Russell Westbrook and Kevin Durant combined for 67 points. Golden State will live with 67 points from OKC’s stars, if Cameron Payne, sharpshooter Anthony Morrow and Serge Ibaka total 12 points on 4 of 15 shooting. Ibaka only took five shots, but his 37 percent 3-point shooting should be utilized more moving forward. Head coach Billy Donovan has yet to figure out how to properly use Ibaka on offense. Enes Kanter scored 10 fourth quarter points, which helped Oklahoma City cut Golden State’s lead. Kanter played a major role in this game, and he’ll hopefully play a major role if these two teams play in a series. The Thunder have flexibility on offense if they choose to use it. Kanter’s a phenomenal low-post scorer who obviously struggles on defense. They had him cover a non-pick and roll wing like Shaun Livingston or Andre Iguodala in the fourth quarter. The Warriors will seek him out in the future, presumably, but for last night the Thunder matched up well down the stretch. Westbrook’s penetration provided opportunities for Kanter around the basket. The Thunder have to stagger Westbrook and Durant’s minutes, also. The Thunder played the entire second half with either Westbrook or Durant on the court. The Thunder cannot afford to sit them together against the Warriors, Spurs or Cavaliers. Since Durant can create his own shot, he doesn’t have to play with Kanter, meaning when Donovan subs first he should keep Durant in and take Westbrook out. Westbrook should then play with Kanter in bench units since Westbrook can split the defense whenever he wants.

Not sure what to make to it, but it’s odd that Golden State struggled to get to the free throw line in the second half. The Warriors took six free throws in the second half, all of which happened in the fourth quarter. After Kanter tied the game at 104, Draymond Green attacked the rim to draw a shooting foul on Kanter. With 3:25 left in the game, Green made one of two from the line, and with Westbrook and Durant taking turns to miss shots, it was Curry’s lay-up and Klay Thompson’s three off an absolute gorgeous feed from Curry that dramatically ended the game. The Warriors have to attack Kanter as often as possible in future games. He’s really a liability on that end, so it’s important Golden State makes Oklahoma City pay for playing him large minutes.

These teams play twice in the next month: Feb. 27 in Oklahoma City and March 3 in California. The Spurs will have something to say about it, but the Thunder have the talent to compete with the Warriors. Whenever two of the five best players in the World play on the same team, you have a chance.