Unless something unforeseen happens, the 76ers will draft Ben Simmons first overall next month. Simmons will join Allen Iverson and Doug Collins as 76ers selected first. Simmons averaged 19 points, 11 rebounds and 4 assists a game his lone season at LSU. He has plenty of question marks following the season. His team embarrassingly didn’t qualify for the NCAA tournament. Simmons had academic issues. Jonathan Givony, from DraftExpress and The Vertical, wrote this about why Simmons isn’t his top prospect. He’s entering the 3-point age in the NBA yet he only shot three from deep last year. Givony’s piece definitely questions his character, work ethic and NBA potential, but the pros, however, outweigh the cons.

Drafting Simmons solidifies Philadelphia’s offensive creator of the future. With Simmons at point forward, the 76ers don’t need a pass-first point guard alongside him. The point guard becomes less of an issue with Simmons in the fold. Ideally, the 76ers trade or draft a point guard who prides himself on defense and shooting threes, similar to Patrick Beverley or George Hill. A non-ball dominant player, really. Philadelphia desperately need a playmaker. Ish Smith provided some spark after Michael Carter-Williams was dealt, but Simmons represents the star-level potential Sam Hinkie sought after. D’Angelo Russell could’ve filled that void last season, but things didn’t fall the 76ers way. This lottery they did, and now Philadelphia can draft the creator they can build around.

Maybe Simmons shies away from the big moment right now. Maybe Simmons doesn’t have what it takes right now. He was passive at times in key situations at LSU. Maybe it wasn’t his fault. Maybe his coach wanted him to do something observers couldn’t see. But to project he will be that way in five years isn’t a fair assessment. Some players are born with a killer instinct, but other players can develop that trait. There’s no doubt Simmons loves getting his teammates involved. It’s been written about several times that when a NBA team gives Simmons space on offense he’ll be even more of a threat than at LSU. Surround Simmons with shooters, and good things should happen for the 76ers.

Philadelphia has mainly used second round or undrafted players as wings the past two seasons. Simmons will play power forward, but his ability to operate in transition will provide opportunity that was just nonexistent before. That’s what’s most exciting about Simmons in Philadelphia–his ability to operate on fast breaks. Nine teams had more steals than Philadelphia last season, and only two had more blocks. Simmons might not be a positive on defense yet, but the hyper-active defense head coach Brett Brown applies presents intrigue for one of Simmons’ biggest strengths.

DraftExpress, the most trusted evaluators, had Brandon Ingram the No. 1 prospect until May 27. Simmons was the top prospect for most of the college season, but his team, and personal, shortcomings, along with Ingram’s continued growth, allowed Ingram to leapfrog Simmons for a couple months. But now Simmons regains the top spot.

Ingram was one of the most accomplished college players last year. His shooting touch might seem the most obvious reasons why people want Philadelphia to draft him first overall. Many people also say Ingram’s the better fit (whatever that means). There’s no such thing as fit on a team that won 10 games a season ago. There’s also no such thing as fit since Philadelphia has cap space to sign free agents and the likelihood of trading Jahlil Okafor and/or Nerlens Noel. Simmons will be a 76er. But Ingram’s game makes that decision more of a question. Ingram’s younger. Ingram has a longer wingspan. Both have a feel for the game that can’t be taught. Read this profile as Luke Winn states his case for Ingram as top pick. It’s a long read, but it illustrates exactly the intrigue of Ingram’s size and shooting ability. He’s also an extremely hard worker who will probably thrive in any situation.

Maybe Ingram’s the “safer” pick, but if Philly does draft Ingram because he’s “safer” than they doubt their ability to mold Simmons into a franchise player.

Wikipedia took it down, but Ben Franklin Simmons sounds perfect. 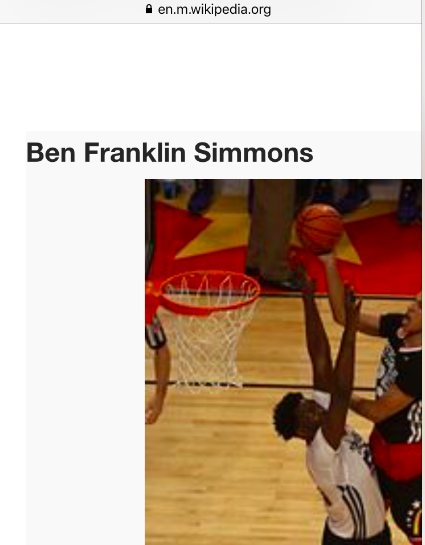