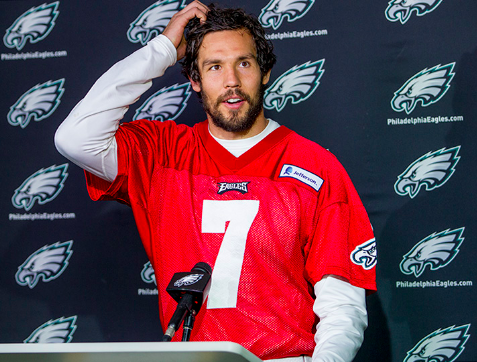 Should the Eagles trade Bradford?

Sam Bradford signed a two-year deal in March. Days later the Eagles made Chase Daniel an expensive back up. The Eagles also made it known they would draft a quarterback somewhere in the 2016 NFL Draft. Bradford, however, didn’t know it would be the second pick in the entire draft.

Yes, Bradford only signed a short contract. He wanted to prove his worth in Philadelphia because knowing what’s happening with the Jets, 49ers and Broncos, there’s no reason why another team wouldn’t have offered Bradford any type of contract. Bradford was probably under the impression that if he played well enough the Eagles would extend him after next season, but that’s out the window after Philadelphia picks a quarterback second overall. It’s easy to look at Bradford’s career numbers and win-loss record, and come away woefully unimpressed. It’s different if the Eagles kept their eighth pick, and used a third round pick on a project quarterback because Bradford would have a legitimate chance to be Philadelphia’s long-term answer at quarterback. With Carson Wentz almost certainly an Eagle, Bradford no longer has a future in Philadelphia.

In a perfect world this all makes sense. Bradford plays well next year, and the Eagles trade him to a team in need of a quarterback. The Eagles get a nice draft pick in exchange, and the opportunity to begin building around Wentz. And then Bradford, since he played so well, signs a long-term contract to be a franchise quarterback. But this isn’t a perfect world, and Bradford probably thought he could be Philadelphia’s future quarterback, and that’s not happening.

Bradford has a point if he really wanted to be the future quarterback of the Eagles, and he felt slighted that the Eagles checked him off of that list. Bradford’s hardly ever had consistent coaching in the NFL. The Rams routinely changed coordinators, and coaches, during Bradford’s tenure, and this year Bradford will go through yet another offensive change. Maybe all Bradford wanted was consistency. Yes, Bradford has made a ton of money in his career, but most people consider him an average quarterback, and he probably thought he’d change that perception in Philadelphia. But what’s been reported, wasn’t that Bradford felt slighted, that Bradford feels upset because the pressure of having a second overall pick sitting behind him places too much weight on Bradford’s shoulders, then maybe Bradford should be traded.

This is Bradford’s job. He’s the quarterback, and he has a fantastic opportunity. He really developed wonderful chemistry with Zach Ertz and Jordan Matthews. The Eagles do not have much talent on offense, so any type of positive season would most likely net Bradford a chance to seek a long-term team next season. Yes, if Bradford does play poorly midway through next year you bet the Eagles will make a change, but it might not even be Wentz. Daniel will most likely serve as Bradford’s back up. So, Bradford can be upset all he wants, but the reality is if he plays well enough, he’ll get exactly what he wants: a team that wants him.