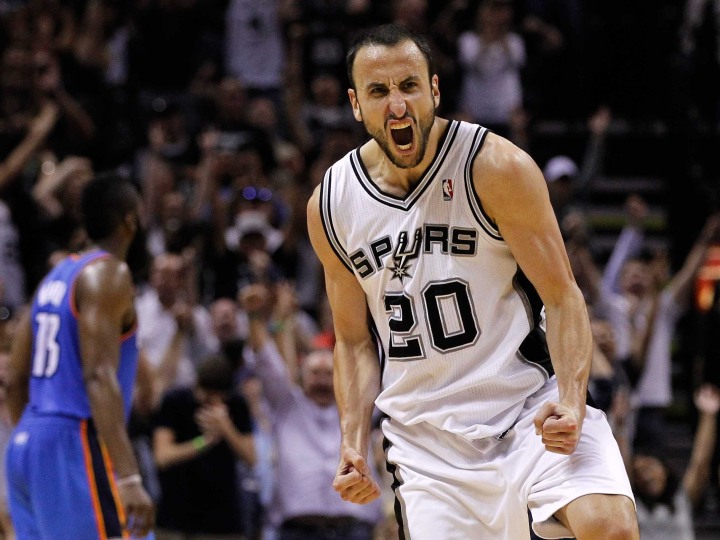 Manu Ginobili could retire at the end of this upcoming season. He turned 38 July 28. He’s coming off a season where he played his most minutes since age 33. He’s been an All-Star two times. He’s one of three players in NBA playoff history with 700 rebounds, 700 assists and 250 made 3-pointers (LeBron James and Kobe Bryant are the others) in a career. Ginobili is one of the most unique players of all time.

The Spurs took Ginobili with the second to last pick in the 1999 draft. His name was mispronounced. Most guys drafted in the late second round barely play, let alone help a team win four championships. But Ginobili isn’t like most people.

Ginobili is his own breed.

His game can be characterized in a number of ways: ferocious, over-aggressive, out of control, fierce and ballsy. There isn’t a pass he won’t attempt. He has dunked over guys much bigger than him. Made step-back jumpers over guys much quicker than him. He’s a lefty with all-world vision and a tendency for making the big play in the biggest of moments. Even if Ginobili makes mistake after mistake, like he did during Game 1 of the Western Conference semifinals in 2013, he’s not afraid to take the big shot like the one he made at the end of overtime to give San Antonio the comeback win in that same game.

It wasn’t just Kawhi Leonard’s missed free throw in Game 6, Tim Duncan’s missed lay-up in Game 7 or Ray Allen’s tying 3-pointer in Game 6 that shifted the series to a Miami Heat win in 2013. Ginobili could not have played worse in that series. Turnover after turnover plagued the injured Ginobili. Aside from Tony Parker, Ginobili’s the guy that creates opportunities for teammates and for himself. He runs the offense during end of quarter situations. He’s so good at getting to the paint, and either drawing a foul, making a tough shot or dishing it unorthodoxly to a teammate (no matter if that teammate appeared open or not). That’s just the way Ginobili plays. He’s an attacker in every sense of the word. But during that Finals run, Ginobili wasn’t the same Ginobili. He was older. He was worn down. And he was not very good.

Ginobili shot 30 percent from 3 that postseason. He had some games where he looked like the old Ginobili, but too frequently he just looked like old Ginobili. He had two double-digit games in the Finals, including an 18-point, five-assist Game 7, but he had eight costly turnovers against Miami in Game 6. It was up and down for Ginobili all postseason. It looked like the end for Ginobili. No one would blame him if he hung up the sneaks after 2013. But that’s never who Ginobili was. He wasn’t just going to quit because his body wasn’t feeling it. He wasn’t just going to give up because he wasn’t the same.

Ginobili re-signed with San Antonio that summer to a two-year deal. The Spurs took that Finals loss to Miami hard. The whole team approached that season with one mission in mind: to win back what they let slip out of their hands. Ginobili played better. He had crisper passes, attacked the basket in a way he couldn’t the postseason prior and took over portions of the NBA Finals, namely Game 5 when he dunked over Chris Bosh.

Future Hall of Famers Kevin Garnett, Tim Duncan, Kobe Bryant, Dirk Nowitzki, Vince Carter, Paul Pierce and Ray Allen will call it quits over the next couple seasons. Ginobili doesn’t have any of those players’ regular season statistics. He won’t be first ballot like most of those players. But he’s made just as big an impact as those players.

James Harden modeled his game off Manu Ginobili. D’Angelo Russell said the same thing. Last spring, Australian sensation and lottery pick Dante Exum also said he likes to play like Manu. Ginobili led Argentina to a 2004 Olympic Gold medal. Ginobili was the best player for the team that defeated Tim Duncan, Allen Iverson and young LeBron James and the rest of the United States team. Ginobili had 29 points against the U.S. in Argentina’s semi-final win. Many put the blame on that US team for not being the best basketball team on the planet, but Manu Ginobili and his teammates deserve all the credit for beating America in their own game. Ginobili inspired thousands of basketball enthusiasts across the World during that dazzling performance.

This year could mark the end for Manu Ginobili, especially if the Spurs, with the addition of LaMarcus Aldridge, claim their sixth championship since 1999. At age 38, Ginobili isn’t as explosive as he once was, but he’s ever bit as crafty. He’ll make a jaw-dropping pass or two throughout next postseason. People wonder what could’ve been if Ginobili ever had the opportunity to lead a team or to play in a system that made him the focal point. But I think Ginobili would rather come off the bench, win four championships and be known as one of the most unique basketball players ever.