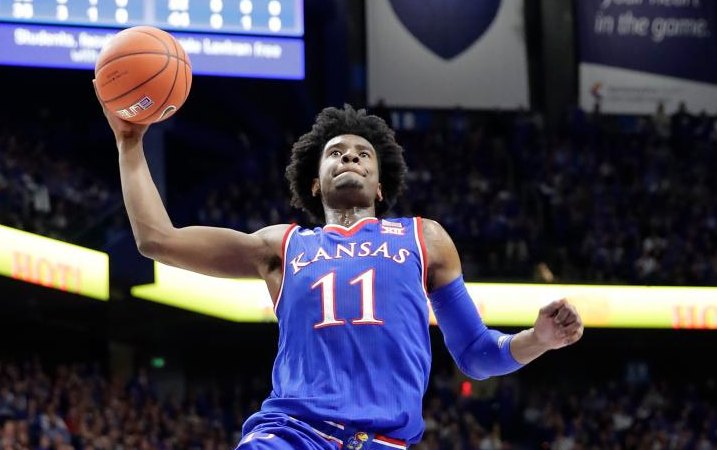 I didn’t watch the lottery. Work got in the way of seeing the genius Sam Hinkie trade from two years ago come into fruition. The Sacramento Kings and Philadelphia swapped picks. It’s a beautiful thing to have happened. Of course one of my best friends cheers for the Celtics while the other loves the Lakers. And the same thing that happened last year happened this year as all three of our teams made the commercial break to guarantee a top-three pick in a loaded draft.  The results, however, were in reverse with Boston claiming the top pick, Lakers staying at second and Philly picking third. The attention immediately flips to who Philly will select third overall, especially after the presumption of Markelle Fultz and Lonzo Ball going one and two. It’s Josh Jackson, and I don’t think it’s particularly close.

Jayson Tatum’s name will surface. As will Malik Monk, De’Aaron Fox and Dennis Smith. But Jackson’s the guy for the Philadelphia 76ers to add to an already fascinating core. The potential perimeter defense of Robert Covington and Jackson appears substantial. Covington made waves as a dominant wing defender during last season, and Jackson’s defensive potential draws comparisons to former 76er Andre Iguodala. It’s a beautiful situation for Philadelphia to be in from a defensive standpoint. In today’s space and pace NBA, defensive flexibility is a must. Jackson makes too much sense for Philly’s efforts to become the best defensive team in the NBA. Head coach Brett Brown would be enthralled with the idea of pressuring teams with Covington and Jackson with Joel Embiid protecting the rim.  There’s another aspect of basketball, however. And on offense people will question whether Jackson’s the right selection or not.

Jackson shot the ball well from three during the second half of his lone season at Kansas. But it was a small sample size, and college three-point shooting success doesn’t always translate to NBA three-point shooting success. Free-throw shooting usually determines NBA three-point shooting at a more consistent rate, but Jackson struggled from the line. It wasn’t Aaron Gordon bad (42.2 percent), but it wasn’t much better (56.6 percent on 173 attempts) Philly fans probably cringe anytime they hear a prospects a jumper away from being a bona fide stud. Memories of Nerlens Noel working on his jumper, and Michael Carter-Williams clanking shot after shot come to mind. Yeah, Jackson has to re-tool his shot. It’s not a pretty from a mechanical perspective. Kevin O’Connor,  of the Ringer, provided this assessment of Jackson’s shooting mechanics: Poor shooting mechanics needing an overhaul: wide base, elbow out, brings ball to shot pocket early, low and slow release, has a hitch. (By the way, please check out Kevin O’Connor’s NBA Draft Guide, it’s tremendous. I trust Draft Express the most for NBA draft material, but the NBA Draft Guide better be bookmarked on your computers).

Can Jackson ever be an average three-point shooter? Will spacing work with non-shooter Ben Simmons? Don’t the 76ers need to draft Monk to be the team’s perimeter, go-to scorer? These are valid questions. Some won’t be answered until years from now. It takes the top-picks plenty of time to figure the NBA out. And Jackson won’t be any different. Jackson, however, has the superstar potential every NBA team desires. Jackson also isn’t just this athletic wing with little offensive diversity. Jackson was a playmaker at Kansas, averaging three assists per game. His ability to quickly drive by his defender and find a teammate with a solid pass will translate to the next level. The idea is for Embiid to remain healthy. Jackson doesn’t have to be the absolute workhorse on offense. Philly’s style of play will be team friendly. Everyone will get touches, and it’s Embiid who will be the focal offensive point. In that respect, Jackson makes more sense for Philly’s offense than a guy like Tatum. Tatum is a throwback, DeMar DeRozan-type scorer capable of scoring from all over expect from three. Jackson could play some power forward, too. I admit Monk would be the perfect offensive fit for Philly, but basketball is a two-way game, and Jackson’s just a much better overall prospect than the sharpshooting Kentucky freshman.

It’s unclear who Bryan Colangelo favors for the 76ers. Two years ago I tweeted something along the lines of: welcome to Philadelphia, DeAngelo Russell. I assumed Los Angeles would pick Jahlil Okafor. But we know how that ended. The Lakers are destined for Ball, but crazier things have happened. Embiid said after the lottery he expected Fultz and Ball to go one and two, and the two guys he thinks Philly would chose are Tatum and Jackson. I tend to agree with Embiid, but the guy has to be Josh Jackson.

And Jackson tweeted this out in January: